Have you been rejected or disappointed time and time again?

If you have been rejected, one thing for sure, you are on the path to greatness.

Read those stories again and move on whenever you get rejected. The door to get what you want is wide open. Be it million dollars, a dream of becoming the next millionaire or billionaire.

The genius quiz might have taken you here. First, if you can solve the quiz in the image by answering correctly which tank will be full first, you are in the 1%. You are a genius.

Second, I must be honest, the genius quiz is to capture your attention as what I wrote below is the secret of success that only 1% people get. Many of them can’t solve the quiz you just saw. Yet, they became successful and wealthy.

Have you been rejected or disappointed time and time again?

Colonel Harland Sanders is known as the founder of Kentucky Fried Chicken. He retired at age of 65 after working through odd jobs throughout his life. He felt like a failure and decided to commit suicide. However, instead of writing his will, he wrote what he wanted in life and decided to make it. He borrowed $87 to fry up chicken using his recipe and went door to door to sell. He knocked on 1010 doors. He got rejected 1009 times before the first yes.

“I made a resolve then that I was going to amount to something if I could. And no hours, nor amount of labor, nor amount of money would deter me from giving the best that there was in me.”

Gone With the Wind was rejected by 38 publishers.

Walt Disney was turned down 302 times before he got financed to execute his dream of creating Walt Disney World. 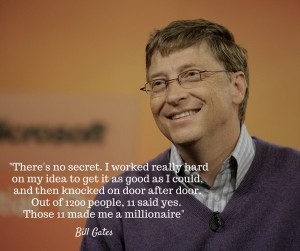 “There’s no secret. I worked really hard on my idea to get it as good as I could, and then knocked on door after door.
I ended up showing my idea to 1200 people.
900 said no.
300 people showed some interest.
Only 85 people actually did anything.
30 took a serious look.
And 11 made me a multi-millionaire.” – Bill Gates, 1986

Oprah Winfrey was fired from her job as a reporter because she was unfit for Tv.

J K Rowling was sacked as a secretary because she was a day dreamer. She was then rejected by 12 publishers after writing Harry potter. Her manuscript was later accepted by Chairman of Bloomsbury.  Her novel “Harry Porter” would later make her a billionaire.

Steven Spielberg was turned down three times by the University of Southern California School of Theater, Film and Television.

Even though he attended another school and dropped out, he earned his BA and became an influential filmmakers in the history of cinema with Academy Award for Best Director for Schindler’s List (1993) and Saving Private Ryan (1998).

Jack Ma, the Chinese billionaires, got rejected by Harvard 10 times. After college, he applied to 30 jobs and was rejected from every one. He applied to KFC. Of 24 applicants, 23 got accepted except Jack Ma. His cousin and he applied to be a waiter for a four star hotel. Even though his cousin scored lower than him, Jack Ma was turned down.

Those people were rejected and moved on. They became such successful that the world only remembered their greatness.

If you have been rejected, one thing for sure, you are on the path to greatness.

My mentor, Steve Chandler, taught a simple method to deal with rejection: if you are willing to ask 1000 people, you will get what you want. In a simpler term, keep asking until you get a YES.

Read above stories again and move on whenever you get rejected. The door to get what you want is wide open. Be it million dollars, a dream of becoming the next millionaire or billionaire.

About the author: Hoan Do is a certified leadership coach. Hoan have led multiple teams at Symantec Inc. across the globe delivering world-class solutions to protect consumers and businesses. Hoan is an expert in building highly performing teams. He believes that the best leader is the leader that could grow his followers to be leaders. Hoan has been organizing mastermind groups to share with other leaders about transformational leadership and coaching. He has trained many leaders via mastermind groups, workshops, and one-on-one coaching.

If you are curious about the above method and how you can apply it to your life successfully, open your email and send me an inquiry at coach@hoanmdo.com

PS: if this article inspires you, don’t wait. Take action immediately. If you want to talk, contact me by sending me an email to hoandojmx@gmail.com
PSS: if you are at the age that makes you think you are too old to start, check out those stories: It’s never too late

8 thoughts on “This simple skill is worth millions, helped many become millionaires, billionaires”